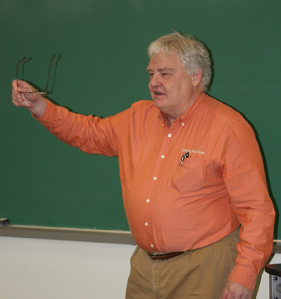 David Rogers, Editor and Publisher, Blowing Rock News/GNNCorp., will speak at the Boone Sunrise Rotary on Tuesday, Nov. 10 at 7:30 am.

David was born in Texas but spent almost all of his early years growing up on the outskirts of Bakersfield, California. In high school, he was active in forensics where he won several regional, state, and national oratory contests.

Also during this period he was in 4-H, and in 1967 was a California delegate to the National 4-H Club Congress in Chicago.

He worked his way through college at the University of Redlands, Claremont McKenna College, and California State University, Bakersfield, graduating with a B.A. in History while specializing in the American Colonial period. His work during the school years included working on the school grounds crew and in the dining hall, but had intervening periods working as a roustabout in the oilfields and a Teamsters Union job as a warehouseman in South Central Los Angeles.

David is currently editor and publisher of Blowing Rock News and the president of its parent company, Watauga Digital Media, LLC. Both of those entities are part of his larger entrepreneurial vision for community journalism to be advanced through a network of digital communities, each providing neighborhood-level news, information and commercial messaging to the individual markets identified and served.

Mr. Rogers spent more than 35 years in the financial services industry, most notably in institutional equity research and sales and as director of equity research for investment banking firms.

Mr. Rogers’ outside interests include writing and a growing passion for covering sports of all kinds, as well as a newer interest in sports photography. You may have seen him on the field or on the court at App State football, baseball, soccer, field hockey, men’s basketball, women’s basketball, softball, or cross-country events. If you watched the Carolina Panthers season opener against Jacksonville, the Appalachian State game at Clemson, or the UNC-Charlotte game against Florida Atlantic, he was on the field with his camera.

He is a member of Rumple Memorial Presbyterian Church in Blowing Rock, where he sings in the Sanctuary Choir. He is a 2011 graduate of the Blowing Rock Chamber of Commerce Leadership Challenge. From 1970 to 2001, he was involved in rugby football, as player, referee, coach and administrator on various levels in Los Angeles, San Diego, Bakersfield, New York City, Chicago, Charlotte, and at Appalachian State University.

He is married to Kim Rogers, co-owner of Jenkins Realtors in Blowing Rock. Her extended family of three grown children and five grandchildren have adopted Mr. Rogers as “Granpa Dave.”